After working for a few years in a co-working space and quite some travel, noise-canceling headphones seemed like a must-have.

So I went shopping around and the Sony Wh-1000xm3 quickly caught my attention.

And if you're also thinking about buying them, here's my honest review.

It's the most expensive headphones I ever bought and by far the best investment I've made this year.

At 300$ (or 10,000฿ if you're also in Thailand), you have the best Bluetooth noise-canceling headphones on the market. Honestly, almost everything is great about the Sony 1000xm3, except maybe the name.

I have been using them for about 2 months now and they didn't disappoint.

From the sound to the noise canceling, it checks all the boxes.

Out for the box, the Sony wh1000xm3 sound really good.

Personally, I listen to all styles of music from Heavy Metal to Drum and Bass and Hip Hop.

I use Spotify to stream music so it might not the highest music quality you can get but it always sounds great.

As someone who didn't try many high-end headphones in his life, I feel like I'm discovering some sounds I've been listening for years.

There's a great bass that has punch and it never goes too far in one direction, no matter what type of music you listen to. When you put on the wh1000xm3 the sound around you is instantly tuned down. Even when they're not plugged.

It almost feels like there are 2 parts to sony noise-canceling headphones wh1000xm3 that get into action.

First, the way it's built. As soon as you put them on you can feel something is happening. All the surrounding noise becomes suddenly quieter. You can still hear it but it's more subtle.

And that's the noise canceling that comes only from the hardware of the sony mx 1000 m3.

That means you already have some noise cancellation going on even when they're off or plugged in with a cable and you're not playing music.

Then, you've got the software. This second part of the noise-canceling that you can only have when they're connected with Bluetooth is what's most impressive about the Sony wh 1000xm3.

You can play around with the app and allow surrounding sound to come in or go completely silent and cut yourself from the world around you.

Both ways, how the headphones adapt is really amazing.

If you're in for noise-canceling, there's nothing like it out there. The technology and hardware combined with the app are just unmatched. 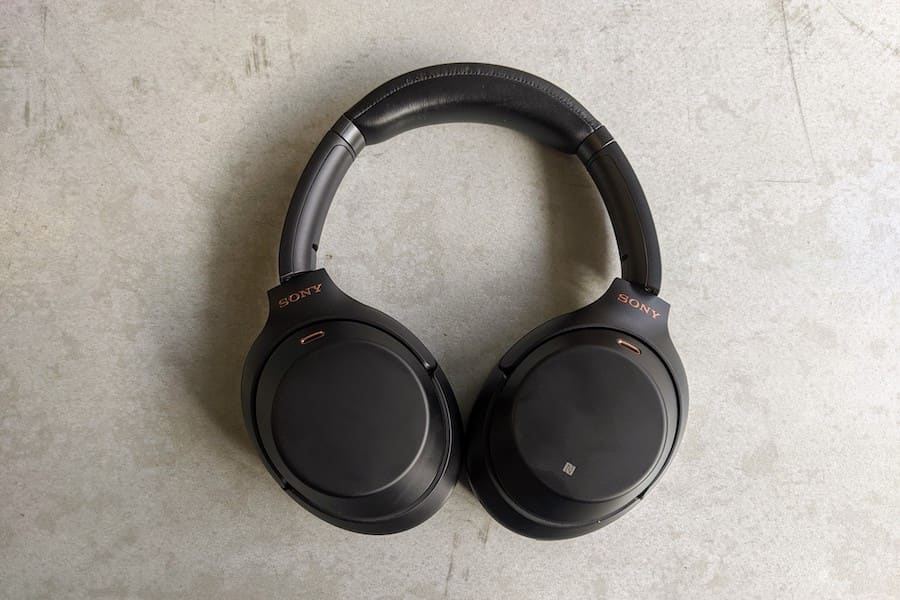 I didn't get the occasion to challenge the sony wh-1000xm3 battery life yet.

I mostly use the headphones plugged to my computer when I work.

But I took them a few times outside to play with the noise canceling and after about twenty minutes playing with the app and trying different modes, it didn't even lose 2% of battery.

So I wouldn't worry much about the battery life if I was traveling or using them all day, I'm pretty sure they will hold

But for a more complete review and as I have to travel soon for work, I'll check how much the battery lasts at this moment and come back to update that part.

The feel of the headphones is what surprised me the most out of the box.

They're really light, but feel robust. The wh1000xm3 is mostly made of plastic but it doesn't feel cheap at all.

The best part is when you put them on. They sit really well on your head, without pressing too much.

And compared to other wireless headphones I've tried and because they're so light, they're really comfortable even when you use them for hours.

I use the Sony mx 1000 m3 daily for about 6 to 10 hours when I'm at the office and they don't feel heavy even after all this time. Another thing I love about the Sony 1000xm3 is how easy they are to carry.

They fold into a tiny travel case that is the perfect size to fit in a backpack or even carry around in your laptop bag.

For anyone like me traveling often and who doesn't carry big bags with a lot of room to spare, that's just perfect.

The app that packs all the options for the Sony wh-1000xm3 is really what sets it apart from the competition.

Sony Headphones App offers so much customization, in the app, you can change :

It even adapts to your movement. If you're walking, standing still, or running, it adapts to your activity to offer the best sound and noise cancellation.

You can even use the app to scan your ear so it can customize the sound to offer the best equalization for you.

I don't even understand how it works but it sounds cool.

Just press the power button for 5 seconds and it will automatically be recognized by the app on your phone.

I've only used it for a few months now. So I might see something disappointing in the future.

But for now and after using it for days for some time more than 10 hours straight, I've got nothing bad to say about it.

I know it doesn't seem like an honest review of the Sony WH-1000XM3 but it's my real take on it for now.

Trust me, I'm french so I will never miss an opportunity to complain. When there's one.

I've got nothing but praises for the 1000xm3 except for the name. If you're in the market right now for wireless noise-canceling headphones, that's a no brainer.

Usually, my go-to is Amazon or any duty-free shop when I'm traveling.

Now, if you're in Thailand like, there are a few Sony shops in Bangkok, including one at EmQuartier ( Phrom Phong BTS station ).

But check the price first.

There are a few Sony wh-1000xm3 sales online, including at Amazon who recently cut the price by 50$ when Bose released their last noise-canceling headphones.

Now they sell for 249$ on Amazon and with Black Friday and Christmas coming soon, they're probably gonna cut the price of the Sony 1000xm3 even more soon.

There's a lot of rumors about them and a lot of people are asking if they should wait for the Sony 1000xm4 to come out.

But as Sony hasn't announced any release date for the wh-1000xm4, they are probably coming in a while.

And honestly, if you need a pair of wireless noise-canceling headphones right now, you can buy the sony wh1000xm3 and still not regret it in a year from now.

Yes. I've asked myself the same question before I bought it. And I understand at this price, you want to think about it twice before you buy it.

But if the noise canceling and the sound are both important for you, the Sony WH 1000xm3 is perfect for you. It's not cheap, but it's worth the money.

About 3 hours. But there's a quick charge that gives you a few hours of use after just 10 minutes of charge.

Press the power button when the headphones are on. The voice will tell the percentage of battery. Or you can check the Sony headphones app on your phone.

If I missed anything or if you have any question, drop me a comment and I'll be happy to answer.