In June 2019 I won free tickets to Knock Knock Festival with a contest on Leo Beer Official Instagram account.

And even though I never heard about that festival before, you know your boy, free tickets to a music festival isn't something I will refuse.

Plus, for the second edition in 2019, the lineup was incredibly packed.

The kind of lineup we’re used to only see at big events in Thailand, like Songkran (Thai New Year) or New Years' eve.

But outside of that, having 3 of DJ Mag top 100 DJs is pretty amazing!

So here we go on our way to Pattaya to see what Knock Knock Festival is about and if it's your worth your money.

For that second edition, the lineup was as solid as it gets for this kind of Festival.

The full lineup is below but just to drop a few names :

If you're into EDM, you know what it's worth. For that second edition prices were :

I don't really know who buys this kind of stuff, but well, at least that's an option. (and if you're the type of people that buy that, let's connect ! 😉) How to get there ?

But if like us you're staying far from the mall and want to go to the festival whenever you want, you can use Grab Taxi.

Getting your tickets is gonna take a while.

It took us about 45 minutes to get our bracelet on the first day of the event.

So if you want to see your favorite DJ at 9 pm, make sure you get there at 8 pm to have the time to get your ticket and grab a drink!

Once you have your bracelet, you're good to go. Security is pretty fast.

All that is left to do is to put money on the chip to buy drinks and food, and that won't take as long as getting the tickets.

Queues were pretty fast inside, even though it wasn't at full capacity we never waited more than 15 minutes for toilets, drinks or to recharge our bracelet.

For us, the bar close to the stage was a lot faster.

So have a look into this one if you don't want to spend too much time in the queue.

What do they serve? That's a good question and I don't really have the answer.

As we were invited by Leo we drunk beers all weekend.

Not bad for a festival, if you don't mind going to the toilets every hour.

Like most festivals around the world and especially in Thailand, the crowd is amazing.

No dickhead or assholes on sight. Overall, everybody was amazing and good fun.

The best part of the festival is meeting new people and partying with people from all around the world, Knock Knock Festival will get you that.

We were surprised to see it was far from crowded for that second edition, especially with that kind of lineup.

Anyway, it was easy to get close to the stage and not too packed.

And even if it does get busier, Maya Space is big enough to welcome twice the number of people that you can see on the video below, so you'll be fine. 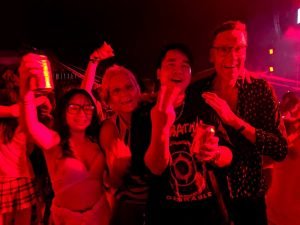 Where to Celebrate Songkran in Bangkok ?

While you're in Pattaya, explore my guide of Pattaya to find everything you need to know about how to get there, where to stay, where to go out...