Babyface is the latest addition to Ekamai nightlife and a club that comes with big arguments to get listed as one of the best clubs in Bangkok.

Attracting a young Thai crowd with blasting EDM music and cutting edge design with LED panels all over the walls and the stage, Babyface is for those who have money to splash and who want to get away from the clubs full of expats that you find in Sukhumvit 11.

But is it the best club in the Ekamai / Thonglor area (and Bangkok)? A few things you need to know before you go to Babyface :

Overall the club is really cool. They don't have the best resident DJs and the music is super loud but the quality of the sound system makes up for it and it feels like a festival inside.

It is still a great nightclub, similar to Onyx, with plenty of space, tons of tables, dancers on stage, good music, and packed with young Thai people.

But my favorite thing is by far the staff at Babyface.

I went there 2 times and sat in the VIP both times so I'm probably biased, but both the security team and the service staff were super nice and took really good care of us.

Way more friendly than the security in a lot of other clubs in Bangkok.

The good thing about Thai clubs is that the night starts early. You can go there around 10 pm and it will already be busy.

Go there before midnight if you want a table or you probably gonna have to wait for one.

The usual, no tank top, shorts, flip flop, no beachwear, no sportswear.

Jeans, t-shirts, and sneakers are fine for guys. What Type of Music they Play ?

They often have multiple DJs playing every night so you usually have a mix of all of those.

They also have regular international and local guest DJs so keep an eye on their Facebook page to know who's coming next.

By far mostly Thais (like the rest of the clubs in Ekamai / Thonglor) with some Chinese, Korean and Japanese.

Not so many westerners or western local expats.

In other words, it's perfect when you need a break from Insanity and Levels or similar clubs that are more focused on expats.

Like most clubs in Bangkok, the vibe is great, people are mainly super friendly and even though it takes some time (and shots) for the crowd to smash it, once you reach that point, it's lit.

Do they Serve Food ?

Yes, they have a small menu of finger food and fried snacks.

But if you want a real meal before your party then have some really good restaurants just at the right of the club (Korean BBQ and Thai / Isaan food). 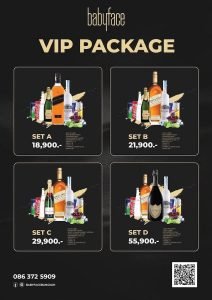 There's no entrance fee at Babyface and bottles start at 2,800฿.

For VIP tables at Babyface, you can see the different packages they have above.

Like a lot of clubs in Bangkok you're gonna need to pay the full amount of the VIP package you choose by bank transfer to confirm the booking.

Credit cards and cash are accepted at the club but not for online bookings. From my own experience trying to book 2 VIP tables there in the past, it's difficult if you don't speak Thai.

Maybe it's just me, but I've messaged them on Messenger and Line, and both time they took too long to respond so we just ended up getting a VIP table when we arrived.

Disappointing for a club of that standing and that kind of price tag.

Hopefully, they can fix that soon and make it easy for everyone to book a table in just minutes.

But if you got someone who speaks Thai in your group, just ask them to call. You can take the BTS to Ekamai station and then a motorbike taxi to the club.

Or just get a taxi on Grab App and look for Babyface Superclub.

But keep in mind that Ekamai is one of the busiest streets at night so expect to spend a good 5 to 10 minutes stuck in traffic when you enter the soi. At the time I'm writing these lines, the website is useless.

It's only good enough to get the address and the link to their social media. No booking form or menu there. Onyx Bangkok : Does it Live Up to the Hype ? I'm reviewing every bars and clubs I go to and do my best to keep my guide of Bangkok nightlife up to date with the best places in town. Click here to see it.

And if you've been to Babyface Superclub in Ekamai, let me know what you think in the comments.